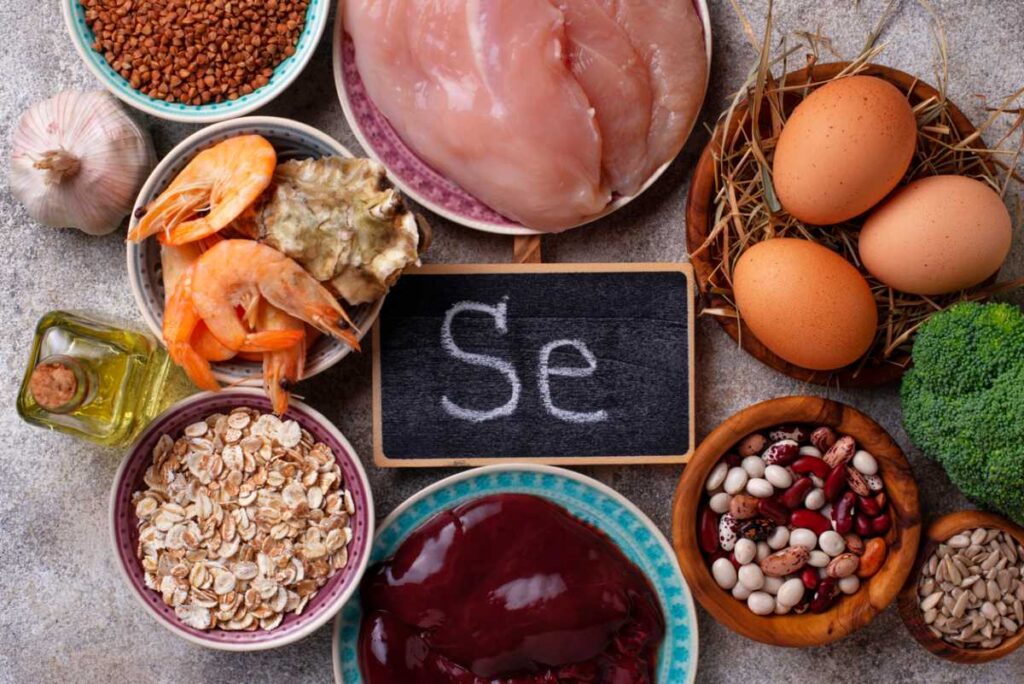 Selenium: properties and importance for our body

Selenium is an essential nutrient for our body that can be found in every cell of the body.

Specifically, it is a micronutrient or what is known as a trace element, i.e. it is an essential trace element or nutrient that is needed in very small quantities or concentrations.

To be precise, about 55 µg of selenium per day is required for both men and women.

But what are the functions of selenium, what are its properties and how can the benefits of this trace element be ensured?

Selenium is vital for the normal functioning of our metabolism. It is a key micronutrient, for example, for the proper functioning of the thyroid and reproductive system.

It is also important for protection against free radical damage. This is because selenium is involved in the production of antioxidant enzymes that prevent cell damage.

In other words, selenium has antioxidant properties. In fact, this is one of its most important benefits.

If we talk about selenium, its properties and benefits, we cannot fail to mention the immunological function of this trace element, which also plays a protective role against infections.

Maintaining optimal selenium concentrations in the body, through its protective capacity against oxidative stress, could prevent chronic inflammation and cardiovascular diseases.

In addition, studies have suggested that selenium supplementation may reduce the average incidence of certain cancers, such as liver cancer in association with hepatitis B viral infection or prostate cancer in men.

On the other hand, it is thought that low selenium levels may contribute to an increased risk of age-related cognitive decline.

Low selenium levels have been associated with effects contrary to those seen in the previous section. That is, increased incidence of certain cancers, increased loss of cognitive functions, increased vulnerability to oxidative damage…

However, although selenium deficiency or deficiency as such is rare, it does occur in certain cases and can lead to specific problems that can be serious.

When the body’s selenium supply is insufficient, Keshan disease, a viral infectious disease affecting the myocardium (the walls of the heart), can develop.

Another disease that can occur as a result of selenium deficiency is Kashin-Beck disease, which affects joints and bones.

In addition, if selenium deficiency is combined with iodine deficiency, it may promote the occurrence of hypothyroidism.

Fortunately, in these cases, selenium supplementation as a treatment is usually sufficient to achieve full recovery.

Selenium supplements also help prevent cardiomyopathy caused by Keshan disease, but do not cure it once it has developed.

Sources of selenium: food and supplements

Selenium occurs naturally in many foods. However, although it is found in different food groups, its amount or concentration varies from one food to another.

The highest concentrations of selenium are found in meat, offal, seafood and cereals.

We can also get this micronutrient into the body by eating fruit and vegetables, although the concentration of selenium in these foods is generally low.

On the other hand, selenium can be incorporated into the diet through supplementation.

Although we can obtain the necessary amounts of this trace element through our nutrition, selenium supplements are especially recommended when there are drawbacks or impediments to achieving an adequate intake through food intake.

They are also appropriate in certain health circumstances that may interfere with obtaining sufficient selenium from the diet. For example:

Although selenium deficiency itself is rare, according to the ANIBES scientific study by the Spanish Nutrition Foundation, 25% of the European population has intakes below 80% of the recommended daily amounts of selenium.

In other words, although we are not talking about a deficiency, there is a considerable percentage of the population that does not achieve an optimal selenium intake through their diet and is subclinically deficient.

Despite being a mild situation, the relevance of this subclinical deficiency can be seen when selenium supplementation takes place, as improvement of the affected person takes place.

Therefore, in many cases it may be advisable to supplement the diet with a selenium-containing supplement or complex.

An example of such a formulation is G7 Beauty, a food supplement that contains organic silica and vitamin E in addition to selenium.

Vitamin E fortification is of particular interest because it enhances the antioxidant effect of selenium.

Another ideal supplement for improving selenium levels is Orgono Articomplex, which also includes beneficial ingredients such as organic silica, zinc, vitamin C and magnesium, among others. We hope we have helped you understand the importance of selenium and its properties!