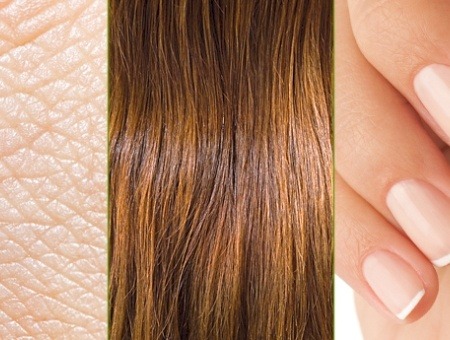 SILICIUM G5 AND ITS IMPORTANCE FOR SKIN, HAIR AND NAILS

The silica provided by silicium acts on the reorganization of the architecture of the dermis by inducing an increase in the volume of the skin depressions by means of siloxanic bonds (Si-O-Si) between the glycoproteins. Silica is known to be a bonding agent of the four macromolecules that make up the connective tissue of the skin. It is a vital element in the three-dimensional, spatial structure of the skin, providing it with its mechanical properties. This volume increasing process is fully effective and exclusive to fifth-generation organic silica.

The connective tissues, such as the dermis, are characterized by the presence of an important extracellular matrix, consisting mainly of proteoglycans and glycosaminglycans, collagen and elastin fibres and structural glycoproteins. These elements are organized in such a way that a three-dimensional mesh (supramolecular organization) is formed, which confers its mechanical properties to this type of tissues. It is known that silica is a  bonding element between these elements which make up the connective tissue by means of siloxanic bonds (Si-O-Si) and their presence influences the spatial structure.

Contrary to the filling products normally used in skin depressions, the silica provided by G5 acts on the reorganization of the architecture of the connective tissues.

The deficiency of organic silica from the age of forty produces significant drying of the skin and the appearance of wrinkles.

The works of Zeller and Odier demonstrate the essential role of silica in terms of connective tissue. It has been observed that this is essential for the synthesis of collagen and elastin fibres in the connective tissues. Any deficiency or impoverishment of these tissues involves a loss of elasticity and their integrity. The organic silica derivatives, particularly those provided by Silicium, are recommended for combating wrinkles, stretch marks, and enhancing the skin’s condition. G5 applied locally promotes the resorption of cellulite.

“Discover the fundamental role of Organic Silicium G5 in the natural Antiaging program. A healthy and accessible alternative to plastic surgery. Perfect to regenerate the body and revitalize the mind”.

Pharmacological Study: The aim of this study is to prove the effect of Silicium on the supramolecular restructuring of the extra-cellular matrix in the skin ageing process of hairless mice by evaluating the influence of 5th generation methylsilanol on the evaluation of the structural organization of the dermis. For this, the young untreated skin of 6-month-old mice (testing batch) is compared with that of two batches of 17-month-old mice, one of which is treated and the other is untreated. The treated mice received a daily external application of Silicium Gel, 5 days a week for 5 months at the age of 12 months. The findings showed that the collagen and elastin fibres were restructured, the interfibrillar spaces were maintained and the thickness of the dermis was maintained.  A structural organization of the dermis similar to those of 6 months old was observed.

A study carried out on 100 women who had Silicium Gel applied three times a day for three weeks, showed a reduction in the depth of wrinkles.  Regardless of the area treated, the perception of wrinkle reduction remained for six months in 40% of the volunteers and for one year in 35% of the volunteers.

The effectiveness evaluation was made: