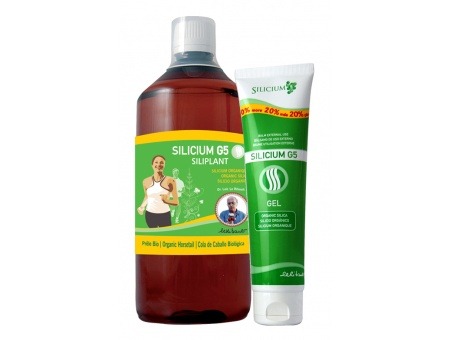 WHAT DOES SILICA G5 OFFER?

It is an active ingredient developed by the French Doctor of Sciences and world silica-specialist, Le Ribault, following the studies of the chemist, Duffaut, who worked with molecules of medical interest for 40 years, particularly initial generation silanols. Le Ribault invented a procedure in which unsuspected characteristics of any particle could be discovered, such as the exact worldwide origin of a grain of sand depending on the silica dissolved on its surface. With the help of scanning electronic microscopes, he worked on the application of his system, which he called quartz exoscopy, in the oil industry, geology, forensic science and also in medicine.

The characteristics of this active ingredient are:

It is the active replenishment of bioavailable silica, the first and most effective on the market, developed by the father of the method, Professor Le Ribault. It is the most researched and perfected product, with more than 14 years of work in its constant improvement. It replenishes the tissues and cellular level with a supply of perfectly active and decisive organic molecules for the structure of the connective tissue regulating the bioelectric properties of the extra-cellular matrix. Replenishment with crystallized, mineral silica is totally ineffective.