It is a new Osteo-articular treatment that is very effective for athletes, supported by studies, with many documented cases and over 12 years of experience. Its capacity to increase articular resistance is its key attribute.

Orgono promotes conjunctive tissue regeneration, by its action on macromolecules key in the composition of cartilage and tendons, elastin and collagen. Its mechanism of action is proven both scientifically and in practice. We get involved personally in every case, monitoring it and giving ongoing support, enabling many cases previously diagnosed with dubious treatment, evolve favorably. A premier league Madrid football team and various triathlon competitors use it on a regular basis. 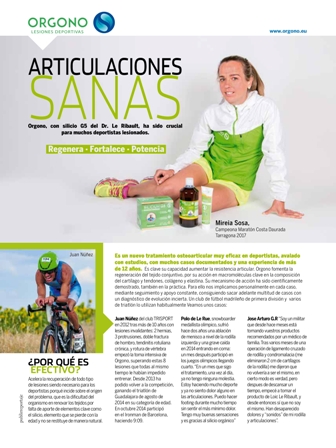 It speeds up recovery of all types of injuries, being necessary for athletes as it acts directly on the focus of the problem, the organism’s difficulty to renew its tissues, due to the lack of key elements such as Silica, element that we loose with age and is not restored naturally. Let's see some cases:


Juan Nunez member of the TriSport club in 2012 after more than 10 years suffering  crippling injuries: 2 hernias, 3 protrusions, double fractured shoulder, chronic patellar tendinitis, and broken vertebra he decided to start to take Orgono, healing these 8 injuries that had prevented him from training. Since 2013 he has been able to return to competition, winning the Guadalajara triathlon, August 2014, in his age group. In October 2014 he participated in the Ironman of Barcelona, doing a time of: 9:09.

Polo de Le Rue, Olympic snowboarder medalist suffered two years ago a meniscus ablation in the left knee and a severe fall in 2014 leaving him in coma: a month later he took part in the Olympic Games ending forth. "Within a month of taking Orgono, I had no more troubles. I'm doing a lot of sport and I don’t have any pain in the joints. I can jog for a long time without feeling the slightest pain. I have a good feeling and it's thanks to organic silicon ".


Jose Arturo GR: "I am a soldier who has been taking your products for a few months after they were prescribed to me by my family doctor. Several months after an operation to my knee cruciate ligament and chondromalacia (I had 2cm of knee cartilage taken out) was told I would never be the same, in a way it was true, but after resting a while, I started taking Loic Le Ribault’s product and now all the aches and grinding sounds coming from my knee have disappeared.